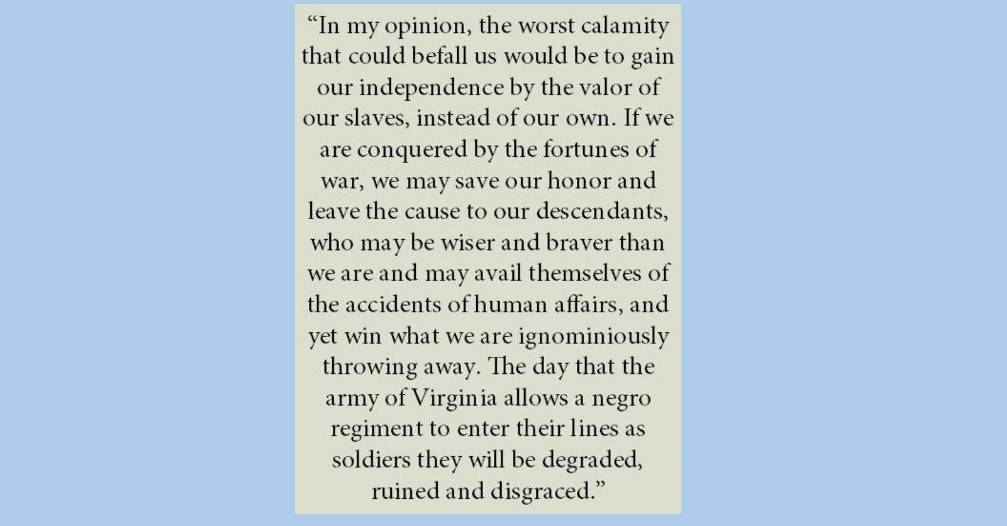 Robert Toombs was the Confederacy's first Secretary of State and a general in Robert E. Lee's army. His response to the decision to enlist black soldiers in the Confederate Army appeared in a June 1865 edition of the Augusta Chronicle. Many Confederates supporters claim that blacks fought alongside white Confederate soldiers. In fact, the CSA prohibited arming black soldiers until March 1865. The idea of enlisting blacks had been debated for some time. Arming slaves was essentially a way of setting them free, since they could not realistically be sent back to plantations after they had fought. General Patrick Cleburne had suggested enlisting slaves a year before, but few in the Confederate leadership considered the proposal, since slavery was the foundation of Southern society. One politician asked, “What did we go to war for, if not to protect our property?” Another suggested, “If slaves will make good soldiers, our whole theory of slavery is wrong.” Lee weighed in on the issue and asked the Confederate government for help. “We must decide whether slavery shall be extinguished by our enemies and the slaves be used against us, or use them ourselves.” Lee asked that the slaves be freed as a condition of fighting, but the bill that passed the Confederate Congress on March 13, 1865,did not stipulate freedom for those who served.