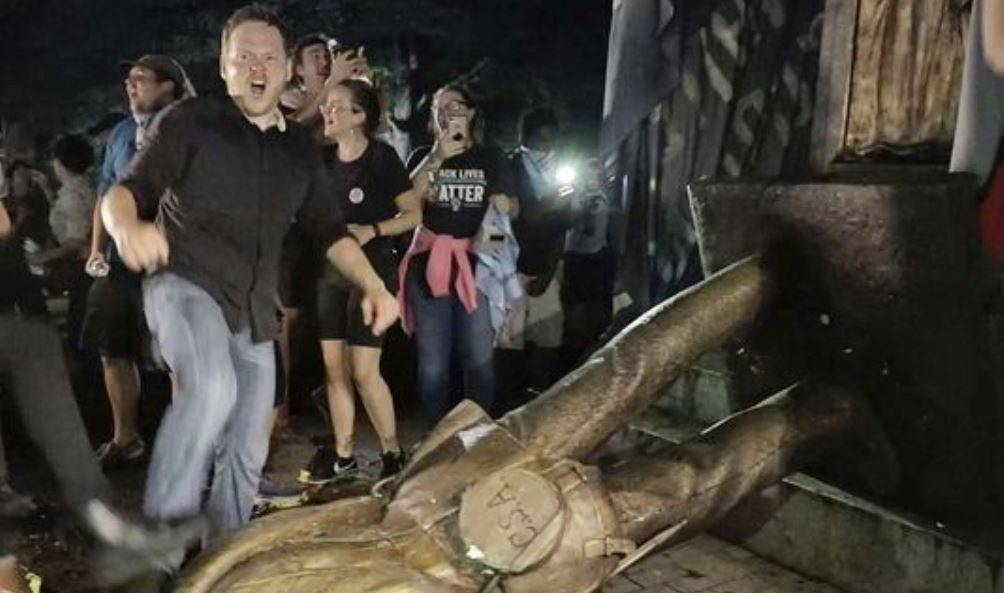 WASHINGTON – Across the country, particularly in the South, the movement to remove Confederate statues from public property continues to claim victories.

In Louisville, Kentucky, the mayor announced last month that two statues, including one of Confederate soldier John B. Castleman, were being relocated; in North Carolina, protesters took things into their own hands by pulling down a statue on the campus of the University of North Carolina-Chapel Hill.

One very public place where more than a dozen of these symbols of the Confederacy remain relatively undisturbed – and little debated – is the country’s shrine to democracy: the U.S. Capitol.

A minor skirmish that got some national attention occurred in the wake of the death of John McCain late last month. Several members of Congress proposed renaming the Russell Senate office building after the Arizona GOP senator. Richard Russell, former senator from Georgia, was a leader of a group of Southerners who repeatedly blocked civil rights legislation.

So far, the momentum for changing the building’s name waned.

Little is heard these days about the statues in the Capitol.

Each state chooses two residents to be honored with statues in the Capitol, most of which are in Statuary Hall.

Those from Southern states include:

•Eight who fought for the Confederacy, including Gen. Robert E. Lee, commander of the Army of Northern Virginia.

BY EBAY
Sell Your Phone On eBay
See more →

•The president and vice president of the Confederacy, Jefferson Davis and Alexander Hamilton Stephens.

•John Calhoun, a former South Carolina senator who was one of the most forceful advocates for slavery, arguing in a floor speech that slavery was not evil. “I hold it to be a good, as it has thus far proved itself to be, to both (races), and will continue to prove so, if not disturbed by the fell spirit of abolition," he said.

One of North Carolina’s honorees is Charles Aycock, who was one of the leaders of the white supremacy campaigns of 1898 and 1900 that led to the disenfranchisement of most black voters and the implementation of Jim Crow laws. His name was removed several years ago from a dormitory at East Carolina University’s Greenville campus and from one at Duke University.

The North Carolina Legislature passed a bill in 2015 that would have replaced the statue of Aycock with one of the Rev. Billy Graham. But only people who have died can be honored with a statue in the U.S. Capitol. Graham died in February, and in April, state legislative leaders named a committee to work on switching the statues.

West Virginia became a state and part of the Union during the Civil War, but one of its statues honors John Kenna, who served in the Confederate Army.

Alabama replaced the statue of Jabez Lamar Monroe Curry, a Confederate officer, with Helen Keller in 2009.

Legislation to remove from the Capitol the statues of people who served the Confederacy was introduced by Democrats in the House and Senate in September 2017, but neither bill has made any progress in the GOP-controlled bodies.

Members of the Congressional Black Caucus have led the legislative  effort, which was prompted in part by the white nationalist protest in August 2017 in Charlottesville, Virginia, which resulted in one woman's death. That protest was in response to a proposal to remove a statute of Lee.

Other bills introduced in this Congress include one to ban the use of federal funds to pay for any symbol of the Confederacy on public land. The bill also would require military installations commemorating Confederate military leaders to be renamed. Another bill would require federal agencies to create an inventory of all monuments, statues, flags and other items that include images of the Confederacy.

Advocates for removing Confederate imagery from the Capitol won a small victory in 2016 when state flags – including the Mississippi flag featuring the Confederate battle emblem – were removed from the tunnel between a House office building and the Capitol.

The push to remove Confederate flags from public spaces began in response to the shooting in 2015 of nine people, all black, at a historic black church in Charleston, South Carolina, by Dylann Roof, who is white. Roof used the Confederate flag to promote racist views. Then-Gov. Nikki Haley signed legislation that mandated removal of a Confederate flag from the state Capitol grounds.

Rep. Bennie Thompson, D-Miss., co-sponsor of a bill that would remove all statues with Confederate connections from the U.S. Capitol, said he has little hope for major action to occur in Washington in the near future.

He said most of the success has occurred at the local level.

He said the Trump administration's hard-line conservative outlook and the proximity to Election Day make any immediate changes a hard sell.

But, he added quickly, "It doesn't mean it's forgotten."