Daughters of the Confederacy Continue Their Campaign of Racism 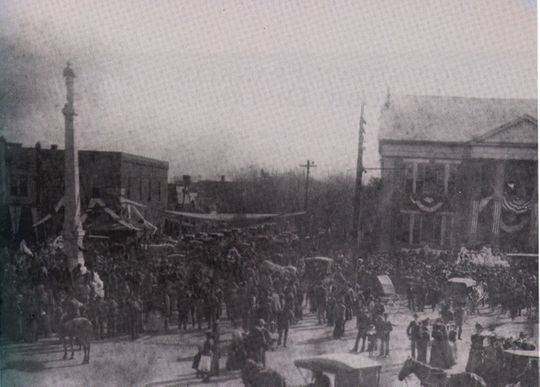 Minutes from the Williamson County quarterly court of 1899 said the Daughters of the Confederacy own the piece of land underneath the monument.

But throughout the years, the square has been developed into the roundabout it is today.

In 1990, architects updated the land around the square.Franklin later spent money on beautification of the public square in the 1990s during the Main Street revitalization project, known as Streetscape.

In 1997, a local ruling from Middle Tennessee District Court Judge Trice Nixon ruled that a piece of property on the Franklin square belonged to the Daughters of the Confederacy.

Daughters of the Confederacy attorney Douglas Jones said that ruling proves they own the public square.

However, the ruling's ambiguity has left Franklin leaders puzzled over the last decade. In 2010, city officials reached an agreement with the Daughters of the Confederacy for the monument's upkeep.

There is not a deed," then-Mayor John Schroer said in 2010. "It is on city property. There are certainly some questions about ownership, but that is not really relevant. This is an important piece of the city of Franklin. They might have gifted it to the city. They don't know."

Property Assessor Brad Coleman added that the Daughters of the Confederacy don't pay property taxes for the land.

Franklin City Administrator Eric Stuckey said he contended that the public square was public right-of-way because of the intersection of two state highways.

Earlier this month, a group of faith leaders and local historians proposed to adding four historical markers to the land around the monument.

Two markers would address the historical significance of the Williamson County Courthouse and Market House, where African-Americans were sold as slaves. Prior to the Civil War, around 12,000 slaves resided in the county.

One would discuss the Franklin riot of 1867, where political groups clashed and one man was killed and at least 27 members of the members of the Colored League were wounded. The last of the markers would address the Jim Crow Era and Reconstruction in Williamson County.

The markers would be next to the steps onto the public square.

This week, aldermen deferred support for the markers. They plan to revisit the issue at their meeting on Sept. 25.

Faith and historical leaders would also like to add a statue recognizing the U.S. Colored Troops from Williamson County who served in the Civil War. A location for that statue hasn't been identified.

The group wants to have the markers up by 2019 and unveil them on Martin Luther King, Jr. Day.